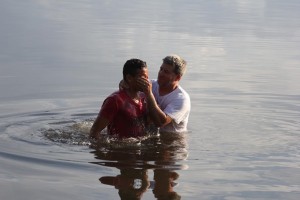 In many ways, our team felt like Paul & Silas did in Acts 16 when the Holy Spirit forbid them to go where they had planned, so they could instead be where God wanted them to be.  As most of you know by now, we had planned for months to visit the community of St. Joseph’s Arara, a          community of 300 families up the Rio Negro.  But because the waters of the Amazon were historically low, there was no way for us to enter the lake and reach the  community.  We found this out on Saturday before we left on   Sunday morning.

We headed to Brazil anyway, believing the Lord had a community that He wanted us to minister, that He would lead us to them, and have them        receptive to us and His gospel when we got there.  Sure enough, after    praying over many tributaries off the Rio Negro, we found ourselves in the middle of a lake, with the Community of Apuau on the bank in front of us.  We would discover it was a community of only 28 families, but families who were starving for the Word of God and Christian fellowship.  Instead of    ministering a couple of days and moving on to another village, the Lord led us to spend all of our days among the families of this lake.

We literally did less, physically, than any trip I have ever been on, but we probably did more, spiritually and psychologically, than any mission trip I have been on – and there have been some amazing trips for Hardin down the mighty Amazon River.  This trip turned out to be a trip where God really taught us about ‘incarnational ministry’.  We actually spent more time with the people than doing for the people, if that makes sense.  They didn’t need what we could do for them, they just needed us to be with them.

Of course, while we were with them, we did for them!  We taught four days of VBS, repaired their school playground equipment (and added monkey bars to it), and we shared the gospel with them personally in their homes and corporately in two worship services.  What we were doing for them   started flowing out of us being with them and getting to know them, instead of being there as Christians from HBC who came to them with a mission in mind.

In the two worship services, five people came to know Christ and a young couple sensed and accepted our invitation to come to the RBBI in March for training on how to lead the church that we believe God is going to raise up this community.  They even offered us land to build a building on, but we expressed the true hope of the true Church being built there first before we think about a building.

Thank you so much HBC for holding the rope of prayer for us while we were in the well of Brazil.  Some of you called this the ‘dark mission trip’ because we had no way of live communication with you.  But I promise you, in no way was this mission trip dark.  God used a little church in Hardin to bring light to the small community of Apuau.  Please continue to pray for Deniko and Evani,  as they were baptized. Also pray for the government to grant our request to fix their generator so the people can have light in their homes as they also now have light in their hearts!