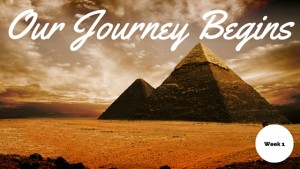 Today we begin a journey through one of the greatest stories every told. It’s a story about slavery and redemption, struggle and triumph, hurt and heroism, bondage and freedom. It’s a story not so much about a people or a hero, but a story about a great God who fights for His own and comes to the rescue of those who call on Him. It’s a story about a promise-keeping God, who goes to great lengths to save and redeem the ones He has promised Himself to. This is the story of the Exodus.

As we begin our epic journey through Exodus, let’s return to the closing of Genesis to set up the story.

“So Joseph remained in Egypt, he and his father’s house. Joseph lived 110 years. And Joseph saw Ephraim’s children of the third generation. The children also of Machir the son of Manasseh were counted as Joseph’s own. And Joseph said to his brothers, “I am about to die, but God will visit you and bring you up out of this land to the land that he swore to Abraham, to Isaac, and to Jacob.” Then Joseph made the sons of Israel swear, saying, “God will surely visit you, and you shall carry up my bones from here.” So Joseph died, being 110 years old. They embalmed him, and he was put in a coffin in Egypt.” (Genesis 50:22-26)

Here at the climax of Genesis, we find Joseph in final moments of his life reminding the people around him of God’s promises to Abraham, Isaac, and Jacob. As promised in Genesis 12, God would give Abraham a land and bless him and make him into a great nation, so that all the nations of the world would be blessed through him. Joseph is dying, and he wants to remind the people around him that Egypt is not their home. They better swear to him they will carry his bones to the land God has promised to give them.

In Exodus, several generations have come and gone since Joseph, and all those who knew him. The people of Israel have grown from 70 persons, who were fairly obscure, herding livestock on the outskirts of the Egypt; to a large enough people that the mightiest man on earth (Pharaoh) began to worry they would overtake the greatest nation on earth (Egypt)!

“These are the names of the sons of Israel who came to Egypt with Jacob, each with his household: 2 Reuben, Simeon, Levi, and Judah, 3 Issachar, Zebulun, and Benjamin, 4 Dan and Naphtali, Gad and Asher. 5 All the descendants of Jacob were seventy persons; Joseph was already in Egypt. 6 Then Joseph died, and all his brothers and all that generation. 7 But the people of Israel were fruitful and increased greatly; they multiplied and grew exceedingly strong, so that the land was filled with them.” (Exodus 1:1-7)

Reading on, in verse 8, we are introduced to the villain of our epic story. “Now there arose a new king over Egypt, who did not know Joseph. And he said to his people, “Behold, the people of Israel are too many and too mighty for us. Come, let us deal shrewdly with them, lest they multiply, and, if war breaks out, they join our enemies and fight against us and escape from the land.” (Exodus 1:8-10)

And just like that, God’s blessed people who were once rescued from famine through Joseph in the land of Egypt, suddenly become slaves in the very land that once saved them. Once free to thrive in Egypt, they were now forced to work as slaves under the iron fist of Pharaoh. God had promised Israel they would grow into a mighty nation, but now in Egypt, they were being cursed by the world instead.

Then the worst news of all came for God’s people. In an attempt to stop the growth of Israel, Pharaoh demanded that all the males born to Israelites be killed and thrown into the Nile. Pharaoh had enough of this people, and he was set on making sure they were controlled, or better yet, extinct.

And now the stage has been set for our epic story. God’s people are slaves in Egypt, with bleeding backs and broken hearts, and a distant memory of a promise God made to their forefathers about a land and great blessings. But somehow those promises seemed to be slipping farther and farther away.