Parenting the “Orphans” of Kenya! 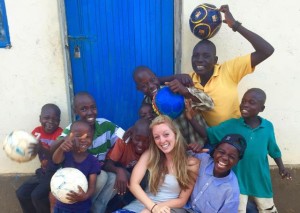 While in Kenya, we were able to register the children for their January school term. As we did, we told the administrators that we were there to, “Represent those in America who love and sponsor this child.” On one such occasion one of our teen boys, named Stephen, said, “Mom, just think… we went from having no parents to having lots of parents!” I then realized we had become family to these precious children.

We all felt the kindred connection. The children chose to call me, “mom” and Jordan and Heather, “sister.” They called Ryan, “brother.” The three college students played soccer with them. I read Bible stories and Pilgrim’s Progress to them. Heather and Jordan cooked their favorite American food for them. We took them swimming and taught them to play Farkle. We bought them new shoes, new uniforms, and new books. We took care of their few medical needs.

The boys quickly “adopted” Ryan as their big brother, taking every opportunity to wrestle him to the ground (it usually took 5 of them). Everywhere Ryan walked there were two smiling little boys holding tightly to his strong hands. They were constantly putting flowers in Heather and Jordan’s hair.

Like concerned parents, we sat them down individually and read their report cards, bragged on their good grades and solemnly asked them about any poor ones. We had serious talks with the high schoolers about education being their future, their inheritance. We talked with them about proving themselves so they could go on to trade school or college. We asked them what they dreamed of doing. We prayed for them to know and do God’s will.

We acted as ambassadors for their “adopted families” in America. We delivered over 350 pounds of gifts donated by HBC family, monthly sponsors, and other people who care for them. It was a joy to watch them read the letters from their loved ones in New Covenant’s fifth grade, the Holbrook family, Chris Allen’s small group, a young guy named Zach, Lucia Sutherland, Kim Davis and many others.

Our family time was so sweet! We got a kick out of watching their eyes get huge, as they watched Avengers, all crowded around Jordan’s little laptop. We had a blast taking them out to a sit-down restaurant. We were so touched when one of the teen girls spontaneously and beautifully sang a worship song about Jesus after dinner!

When we took them to their boarding schools, we saw lots of parents with their children, taking pictures and carrying their belongings, etc. So we did the same. We proudly snapped pictures of them in their new uniforms. We gave them pocket money and snacks. We helped them find their bed and organize their space. We hugged them tight, told them to work hard and we loved them!

We love being a part of this fun, big Kenyan family. We love that God’s family of believers is so huge and there need not be any orphans in His family! Thank you dear church family for adopting the children of Siritanyi Kenya with us!