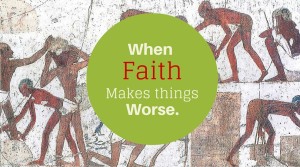 At this point in our story, God’s people are suffering as slaves under the hand of Pharaoh, which begs the question, if God rules the universe, why are His people suffering? Could it be that God’s people are lacking in faith? Maybe if they had more faith, their troubles would turn around and all their dark clouds would disappear. After all, isn’t it true that if we have faith in God everything will be smooth sailing in our lives? Well, let’s see.

At the closing of chapter 4, we read these words about the people of Israel, “And the people believed; and when they heard that the Lord had visited the people of Israel and that he had seen their affliction, they bowed their heads and worshiped.” Here we see God’s people exercising great faith in Him, which is supposed to lead to their health, wealth, and prosperity, right?

This is what happened in chapter 5. Moses goes to Pharaoh and tells him that God says to let His people go so they can take a 3-day journey away from Egypt to hold a feast in His honor. Moses asks in faith, believing in faith along with all of Israel, yet Pharaoh says, “No!”

Not only did Pharaoh refuse their request, he was outraged they even dared to request it. Instead of the storm clouds of life rolling away, they actually got bigger and darker. That very afternoon Pharaoh commanded his men to stop providing straw for the Hebrew brick making factory, while still demanding the same number of bricks to be made each day. Their hard tasks had now been turned into impossible tasks, which lead to many beatings from their Egyptian taskmasters.

At this point, if the Israelites thought things could not get any worse, they just did!

Why did their lives suddenly get dramatically worse? Was it because they lacked faith in God? No, to the contrary, it was because of their great faith in God. Let me rephrase this another way. Israel’s faith in God actually made things worse, rather than better! Yes, you read that right.

In fact, things got so bad that even Moses questioned and doubted the goodness of God. “Then Moses turned to the Lord and said, “O Lord, why have you done evil to this people? Why did you ever send me? For since I came to Pharaoh to speak in your name, he has done evil to this people, and you have not delivered your people at all.” Exodus 5:22-23 Can you hear the anger and frustration in Moses’ voice? God, what are you doing? Why did you even send me here? We have cried to you for good, and all we have received from your hand is evil! We have trusted in your great deliverance, and so far, all we have received is that our slavery has worsened. We have believed in you, and you have not lifted a finger to help us!

Chapter 5 ends with a lot of unanswered questions, but one undeniable truth; sometimes faith in God makes our circumstances worse, rather than better (at least for a moment).

The truth is that some of us have been lied to. We have been told by well-meaning (or not so well-meaning) people, if we will have faith in God, everything will go great in our lives. The reality is that God never promises us a trouble – free life, instead, He promises us something much better. He promises us Himself!

Sometimes, gaining God means losing the world. Sometimes receiving the blessings of the Kingdom of Christ, means you receive the curses of the kingdom that is against it as well.

Israel believed God and they were cursed for it. But not forever, because the kingdom that stood against them was about to fall, and on that day, their cursed plight would turn into blessed freedom. The same will be true for us when the kingdom of this world is replaced by the Kingdom of our Lord and Savior Jesus Christ. 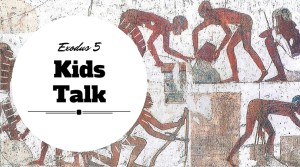