I AM and I will 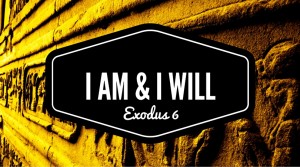 At the end of chapter 5, Moses accused God of being evil for letting His people suffer and not acting on their behalf. Now in chapter 6, God reminds Moses who He is and what He is about to do. At this point, Moses and the people have their eyes fixed on their present distress, rather than on God’s past faithfulness and future promises.

God does for them what God does for all of us. He brings remembrance to their minds and comfort to their hearts. He does this by using a series of first person pronouns, to get the people to focus on Him, rather than on themselves.

First, God helped Moses catch a glimpse of the future saying, “Now you shall see what I will do to Pharaoh, and with a strong hand he will drive them out of his land” (Exodus 6:1)., Secondly, God reminded Moses of the past, “I am the Lord. I appeared to Abraham, to Isaac, and to Jacob, as God Almighty, but by my name the Lord I did not make myself known to them. I also established my covenant with them to give them the land of Canaan…” (Exodus 6:2-4).

Thirdly, God brought Moses back to the present by saying, “Moreover, I have heard the groaning of the people of Israel whom the Egyptians hold as slaves, and I have remembered my covenant.” (Exodus 6:5).

Once again, God’s people couldn’t raise their heads or hearts high enough to see over their current troubles, to catch a vision for what God was going to do in the future through them. Instead, the people disbelieve God because of their hard burdens, and Moses doubts his own abilities because of his past failures. Despite their lack of hope for the future, God promised them good that they could not see yet, but soon would realize.

We are now seeing that we are gazing into a mirror and looking at our own reflection. How often do we forget the faithfulness of God in the past or His good promises for the future, because the present is pressing or closing in on us? Are we not like Israel who disbelieved God, and like Moses who disbelieved in himself?

Just as God had to rescue Israel’s mind through first personal pronouns, He must also do the same for us. He must remind us of what He has done in our past and what He will do in our future, no matter how far away that seems right now.
So raise your head up dear child. Your Heavenly Father is bigger than your present, and His victory for you might be closer than you could even imagine. For He who has been faithful to you in the past, will remain faithful to you in the present as well.

After all, He has already promised you a future, and if you read forward to chapter 12 of Exodus you will find God always keeps His promises to His people. 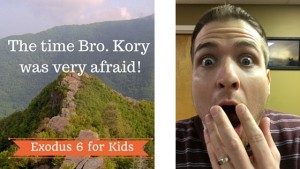