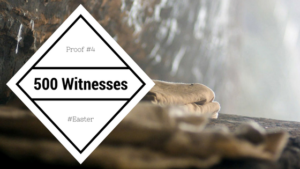 One of the best ways to prove an event really happened is to gather eyewitnesses, and the more eyewitnesses you gather, the more reliable their testimonies become. If one or two people claim to have seen an event, they could be telling the truth or lying. However, if you have 10 or 20 (or 500) people who all claim the same thing, the likelihood of them all lying becomes very unlikely.

So, what about the resurrection of Jesus? Do we have any eyewitnesses, and if so how many do we have?

“… Christ died for our sins in accordance with the Scriptures, that he was buried, that he was raised on the third day in accordance with the Scriptures, and that he appeared to Cephas, then to the twelve. Then he appeared to more than five hundred brothers at one time, most of whom are still alive, though some have fallen asleep.” 1 Corinthians 15:3-5

Notice how Paul uses eyewitnesses to prove to his audience that Jesus really did rise from the dead. He not only says the apostles saw Jesus (they could have made that part up) but that more than 500 people saw Jesus back alive from the dead!

And don’t miss the next detail, “most of whom are still alive”. This is Paul’s way of saying if you don’t believe me (or the apostles), I have 500 other people you can go and ask because most of them are still alive and they can tell you exactly what they saw (not just an empty tomb, but Jesus walking among them).

This massive number of eyewitnesses gives overwhelming proof to the resurrection. For if the resurrection were a made-up story, and there were not really 500 witnesses, Paul could not get away with saying this during the lifetime people who lived within 50 or so years of the resurrection event, and who had access to these so-called witnesses.

So, what does this mean? It means the resurrection was no made up event, and the tomb really was empty that first Easter morning.

Remember how we talked about the Passover yesterday and why the Jews celebrated? Check out this video to see what Jesus said to His disciples as they had their Passover dinner (also known as “the Last Supper”).

Come as a family to celebrate the Lord’s Supper at church tonight at 7pm!. Childcare available for babies through preschool in First Fruits Farm.