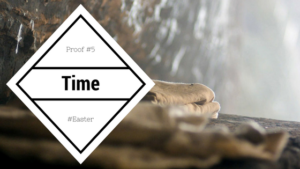 Suppose I made up a legend that George Washington was never really President of the United States. I started it by forging some old documents, and then I paid some reliable scholars to back up my tale. Of course, you might not believe it, but you might also have a hard time proving me wrong.

This is because we are both several hundred years removed from the actual time Washington lived. So, the only way to disprove me would be to point to some other old documents, which I could say were wrong.

You see, those few hundred years work well to my advantage, and here’s how. All the people who actually knew Washington are long gone, which means I can say Washington was never president and no one can stand up and say, “Oh yes he was! I was there and saw him take the oath of office!”

But what if I tried to make up the same story about Washington just a few years after he actually lived? Well, that would be harder because people would immediately protest because they lived during his presidency and knew the real story.

Today critics of the resurrection claim it’s just a made-up legend, like my legend about Washington. But there is a huge problem with this theory; there simply isn’t enough time between the real event and the story for it to be a legend. For the story of the resurrection didn’t begin hundreds of years after the death of Jesus (and everyone who knew him) but it spread immediately after his death.

Paul and all the apostles were telling a story that happened during the lifetime of many of the people they were telling it to. So, if it were a made-up legend, it would not have survived because people would have said, “that’s not true, I saw Jesus die and there is his body in that tomb over there”.

But no one could say that, because the only tomb they could point to was empty, and the story of the resurrection is no legend.

Today is sometimes called “Good Friday.”  How can it be good?  Because we know the end of the story!  Jesus took the punishment for our sin so we could be made right with God.  This video shows us what happens to Jesus after He finishes the Last Supper with His disciples.

Family Idea: Remember the Scavenger Hunt from Wednesday? Click here to see it

There was one item to find from 6 events: