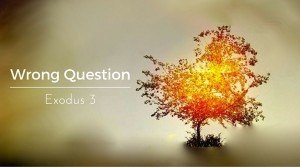 In chapter 3 of Exodus, we come to one of those very familiar Sunday School flannelgraph moments. It’s the moment when God appears to Moses in the burning bush, revealing to Moses who He is, so Moses could stop worrying so much about who he was not.

The day began like every other normal day. Moses was watching his father-in-law’s sheep beside a mountain (a mountain Moses will come back to one day to receive God’s Law), and then something very abnormal happened. A bush began to burn, but was not consumed by the flame. Walking closer to check things out, Moses heard words coming from the bush, words that would change his life forever.

As Moses peered into the flames, he suddenly became conscious of who was speaking to him, so he hid his face because he was too afraid to look. For Moses knew he should not be there, standing on holy ground, his bare feet in the very presence of the one true living God!

Then with his eyes buried in his hands (probably hoping to die at this point), Moses hears the voice tell him about the rescue mission He was about to do for the Israelites in the land of Egypt. Then Moses heard the strangest words coming from the burning bush, “Come, I will send you to Pharaoh that you may bring my people out.” (Exodus 3:10)

What? Were his ears deceiving him, or did God just say He was going to use him to rescue His people from Egyptian slavery? No, that couldn’t be right. Moses was, after all, in the wilderness standing beside a mountain because he had fled from Egypt after murdering an Egyptian! So with a trembling voice he responded, “Who am I that I should go to Pharaoh and bring the children of Israel out of Egypt?” (Exodus 3:11)

In other words, “God there must be some mistake, you must have the wrong guy! I am not qualified to carry out your mission, I’m  a nobody!”

You see, Moses had a problem. He was asking the wrong question. When it came to the mission of God, Moses was concerned with who he was not, rather than who God was. But in order for Moses to fulfill God’s mission, he would have to stop looking at himself, and start looking to the One who was with him; the Lord God.

And the same is true for you today. If your question is always about you, “Who am I?”, you will always see what’s lacking in you, and never do what God is calling you to do. So instead of focusing on who you are not, start focusing on who God is, knowing that the same great I AM who was with Moses has promised to be with you, too. 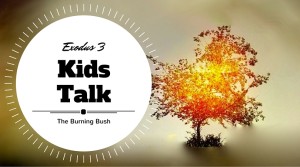