From Almost Dead to Life 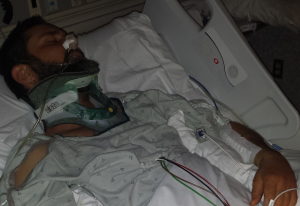 On the night of January 15, 2015, God changed my family’s life forever. My husband went to work that morning, like he does five days a week. I flew across the country to San Diego, California. Around 8pm I received a call from a friend informing me that my husband, Steven, had a car wreck. She didn’t know too many details, but said she would keep me informed. When I hung up the phone, strangely enough I was not in a panic. I was never worried for my husband’s life. I had a peace that could have only come from God! 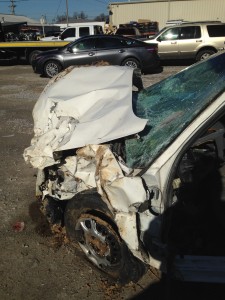 “Peace I leave with you; my peace I give to you. Not as the world gives do I give to you. Let not your hearts be troubled, neither let them be afraid.” John 14:27

Steven was transported to Vanderbilt late that night. The earliest flight that I could take was the next afternoon. That was the longest flight ever, but still I had a peace from God.

We stayed at Vanderbilt for three weeks. I know my way around that hospital more than I ever wanted to. Steven fractured his left hip, broke his left femur, broke above & below his left knee, broke both bones in his left arm, fractured his right knee, shattered his right heal, had a fracture in his neck & lower spine, & a brain bleed. I will never forget the night in the step down trauma unit that Steven woke up & told me that God has been talking to him. He told Him that he was going to stop doing whatever he wanted to do, that he was going to start fully living for Him. Six months later, by the grace of God, he has made a full recovery! You would never know that he even had a wreck. Our God is truly amazing!

“Know therefore that the LORD your God is God, the faithful God who keeps covenant and steadfast love with those who love him and keep his commandments”. Deuteronomy 7:9

When we were able to come back home, Steven still had months of speech, occupational, & physical therapy. Our home was not big enough for the hospital bed & a wheelchair, so we spent two months at my parent’s home. I also needed the help & support of my family to be the caregiver of my husband. My parents helped out with our two children as well.

Steven was off work for six months; we had no weekly paycheck coming home. I work part time, so we had a little income. To be honest, I was tempted each week to not tithe & give God back what was already His. But we remained faithful to Him & He was faithful to us. We thought it was going to be tough, but with God, all things are possible.

A faithful man will abound with blessings…Proverbs 28:20

The abundance of love & support that we received was overwhelming. We received money in the mail from people that we had never met. God is good all the time. All the time God is good.

From this experience that God allowed us to go through, my family has a powerful testimony of God’s never ending love & faithfulness. God had blessed my family in so many ways. My hope is that from our experiences, we will be a blessing to someone else.

This video is about Steve Mason