Participating in His Kingdom During 2016: NEW YEARS CONFERENCE 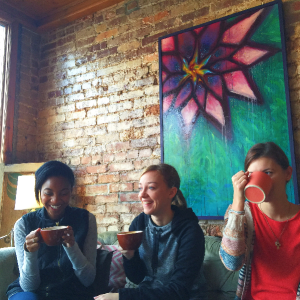 Have you ever experienced a moment where you feel like the Lord is allowing you to see a glimpse of Heaven; a picture of His redemption and future Kingdom, where heartache, death, fear, and strivings are ceased?  As I gazed around a room with 1,300 college students, the Lord gave me a foretaste of the greatness of His Kingdom to come.  All races, ethnicities, backgrounds, stories, heartbreaks were all gathered in one room lifting their voices to their Lord and Savior.  It was nothing short of Revelation 7:9, “After this I looked, and behold, a great multitude that no one could number; from every nation, from all tribes and peoples and languages…”

You would walk the hallways of the Marriott and everywhere you turned, you could hear the whispers of people praying together. You encountered students who were willing to share their biggest heartaches with mere strangers because they believed the power of the gospel was enough.  You saw college students laugh from making fools of themselves because they were the “odd man out”.  It’s not normal, it’s countercultural; it’s redemption.

This picture is not reality in today’s society. New Years Conference is nothing more than a small taste of Heaven, where college students come from across the nation and gather for five days to encounter God.  Let me tell you, He always shows up!  Sophomore, Jocelyn Rhymes said, “NYC was single handedly the best decision I have made thus far in my life. It made me take a step back and actually look at my life and made me want to change it for the better.”  Jocelyn was one of seven students from Murray State to come into a relationship with the Lord.  But all 115 students from Murray State would attest that they encountered God throughout the week, whether it was through worship, seminars, conversations, or speakers.

Robby Gallaty and Rosaria Butterfield were two of the speakers featured at New Years Conference. Both had lived unique lives with dramatic transformations by the power of the gospel (Find podcasts of their stories on conyc2015.org).  Both Robby and Rosaria centered their talks on encountering God.  Junior, Tyler Hardin said after hearing from both speakers,

“Robby at conference really reminded me of how sweet it is that Jesus has personally called us to follow Him and how the things of this world don’t even compare to being His disciple.  Rosaria’s story and her mission since becoming a Christian showed us that the gospel really is the answer to many cultural conflicts that are in our country and campus today.”

Robby Gallaty spoke of the significance of being chosen by God.  He used scripture from Mark 1: 14-20, which tells of the call of the disciples.  The disciples were fishermen, which during that time was not a job to be desired.  They were seen by others to be nothing special.  Robby used an analogy that during today’s time the fishermen’s status would have been similar to those who were chosen last for a kickball game.  He recalled the memories of being lined up side by side, praying not to be the last one chosen, waiting for his name to be called, hearing name after name, until finally his name was called…dead last.

Stop. Don’t just move past this analogy, really take it in.  Do you remember this feeling? Feeling so small, so insignificant, wanting to be chosen.   The truth is Robby spoke of how Jesus chose the disciples because they were weak and needy.  Jesus chooses us not because we have anything to offer, or because we have it all together, but because of the great love with which He loves us.  Because Christ chose you, you are significant and worth the world.

Come to Jesus as you are. The Kingdom of God is not full of people who have it together, but people who know they don’t and they put their faith and trust in the righteousness of Christ.  This is the hope of the future Kingdom, his promise to make all things new.   Start 2016 by means of repentance and trust in the blood of Jesus Christ. Rosaria Butterfield expressed that, “Repentance is the threshold to God’s throne.  God receives glory from our cries of repentance.”  No matter what trials, mistakes, or heartaches you faced in 2015, follow the call of Jesus Christ to make fishers of men and grow disciples, who make disciples.  A New Years Conference experience is not far off from each of us, its God’s finished plan of restoring His kingdom. How will you take part in bringing His Kingdom in 2016?