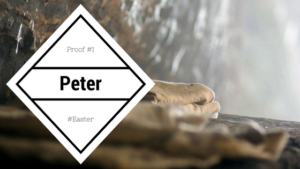 What is “reasonable faith?” It’s faith that is based on events that actually happened (Jesus’s birth, life, death, resurrection, current working, etc.). Christians are not naive people with subjective faith in the existence of some God, somewhere. Instead, Christians have real faith, in a real person, who really came to reveal the real God.

Because the ultimate event of our reasonable faith is the resurrection of Jesus Christ, the biggest question to settle is, “Did Jesus of Nazareth rise from the dead after being executed on a Roman cross?” If the answer is yes, then all people (including you) should repent and believe in Him. If the answer is no, then Christians, above all people, should pitied because we would be following a dead Savior who told us a lie.

Of course, I believe Jesus actually rose from the dead on the third day, but my faith is not based on a fuzzy feeling or a hope-so-wish, but based on the fact that Jesus walked out of the tomb that first Easter morning. So how do I know this? This week, I’ll give you six proofs. Here is #1:

Proof #1: The change in Peter’s life

During Jesus’ trial before the high priest, a little servant girl asked Peter if he was with Jesus, and with Jesus watching, Peter denied knowing Him before this little girl (Luke 22:54-62). Then, a few days after Jesus was beaten and crucified, Peter stood up before a multitude of men and preached that Jesus was the true Messiah who had risen from the dead (Acts 2).

Now comes the obvious question, “What changed the mind of Peter?”

Before the cross, Peter was too cowardly to admit in the presence of a servant girl that he knew Jesus (with Jesus watching), and then after the cross, Peter was so courageous that he preached Jesus for the whole world to hear (knowing he would probably be killed for doing so).

So what caused Peter to move from coward to courageous?

The only logical explanation is that Peter saw Jesus risen from the dead! There is no other explanation for the boldness of Peter. After the cross, he was willing to die for the sake of Jesus. Moments before the cross, Peter sought to protect his skin in the presence of a small crowd of people, but after the empty tomb, Peter spoke boldly about it, even though he was often jailed and eventually killed for it. That is only one reasonable explanation for this. Peter saw Jesus Christ risen from the dead, and that resurrection changed his life forever.

Yesterday was Palm Sunday. We talked about this special day in our First Fruits Farm Sunday School Groups.

Read Matthew 21:1-11 together and ask these questions:

1. Why did the people shout “Hosanna!” And lay down palm branches for Jesus?
2. What do you think it would have been like to see Jesus?

Pray as a family and thank God for bringing Jesus.

Or you can watch this 5 minute video: