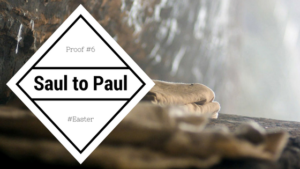 There was a man who hated Jesus and the lie that was spreading about his so-called “resurrection”. This man knew better than to believe any such conspiracy and hated anyone who did. This man’s name was Saul. He was a zealous Pharisee on a mission to kill or imprison as many Christians as he could. The church was terrified of him, but he had no fear of them or their so- called Lord.

So, what happened? What could possibly explain such a radical change in one man’s life?

If the resurrection is a myth, Saul would have remained Saul. But he did not because it is no myth, but a radical life changing event that changed him, and the world forevermore.

Here’s the video for today’s devotion: