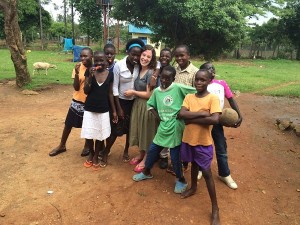 I could get eaten by any kind of wild animal right now, or just bitten to death by mosquitoes. My sunburn is literally never going away. How can I avoid having to bathe in the bucket or going to the outhouse today? Wow, I am actually in Kenya aren’t I?

All of this started running through my mind at about 6:30 this morning when I was awakened by a rooster and the sound of a radio playing Kenyan folk music on full blast. Yes, it is almost as fun as it sounds, friends. For the last eight days at Siritayni Children’s Home, I have literally catapulted out of my comfort zone.

My mom said that for her, stepping onto the orphanage grounds felt like stepping into Jesus’ presence. For me, stepping onto the orphanage grounds for the first time felt like a total trap for my OCD personality and a breeding ground for disease. I have done the mission trip thing. I’ve been to Mexico countless times, and I have had that “mountain top” mission trip experience, but I now know this was no mission trip. Don’t hear me saying mission trips are bad, because they literally save lives and are so amazing. God just knew that wasn’t what I needed this time.

The day we got there, the kids were waiting at the end of the long dirt road, who knows how long, and met us as we were about half way to the orphanage. They immediately jumped on Jordan. I was blown away by the very obvious love they have for her. About ten smiling faces all introduced themselves to me and told me they had been waiting so long to meet me. Even though it took me a few hours to get used to the smells of all the animals around the orphanage, it became impossible for me not to start falling in love with these orphans.

It would be so difficult to explain everything that happens here, but just know that it is very real and powerful. I can share specific stories any time if you are interested! But I will just share this one: last night at dinner, Royson grabbed my phone to look through the pictures we had taken that day. After scrolling through some, he stopped at a family picture we had taken a few months ago and asked how many brothers and sisters I have. Mistakenly, I replied four. He informed me that I actually have 24 now, and that I need to get that right.

As a young, Christian college student, I would argue that the most common phrase I hear from adults regarding my future is to “see what God is calling me to and do that.” Even though it has a nice ring to it, perhaps that’s not all there is to it. Instead of looking for random signs and waiting for the “writing in the sky,” why not just jump in head first and boldly pursue? Instead of being so concerned about choosing the right path, maybe we should be focusing on choosing the right person to accompany us first; that person being the Creator of all things. He tells us to “Commit whatever we do to the Lord and He will establish your plans.”

I felt like God was telling me I needed to go to Kenya, and for the first time in my life, I didn’t look to someone else to give me guidance before making it happen. As difficult as it was for me to relinquish all control and worries, I bit the bullet.

After a week of soccer and volleyball games, hair braiding, three mile walks to church, crazy motorbike rides, candle light dinners, and weird Nigerian movies, I realized that my time here hasn’t been like a mission trip where you build a house then leave, but an experience that doesn’t end. My trip won’t be over because I will go back to America because I now have 20 new family members who are counting on me and who consider me their own.

Control is so difficult to relinquish for a type-A person like me. And even though my hands will probably smell like fish for the rest of my life and my sleep schedule will never recover, I can very confidently say that giving it up was the best decision I have ever made.

So, do the work God has laid our for you, even if it seems crazy. Go on mission trips, pray and support missionaries, and follow God blindly because I don’t think anyone has ever regretted being in the center of His perfect will.