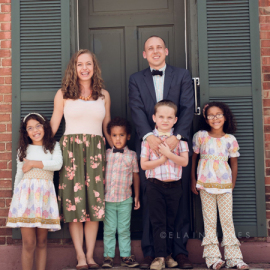 One was fought in a venerable chamber that for over two-hundred years has been inhabited by political giants like Henry Clay, Daniel Webster, and Lyndon B. Johnson. The media reported. Twitter followed the action move-by-move. We held our breath, hoping that we might see a great blow dealt against the murder machine called Planned Parenthood. But at the end of the day we were disappointed, and today our tax dollars continue to fund the crushing of babies and the dismemberment of their bodies for profit.

But the battle in Washington, D.C. was not the only battle that day. In a rural Kentucky courthouse, another battle waged—quietly. Well, actually, not that quietly. Any time that you dress four children in their Sunday best, put them in a room, and tell them to sit still and quiet, you have almost guaranteed the opposite. But they did their best, trying to hold in all the energy squirming to the surface of their little bodies, and did I mention that the chairs could spin? 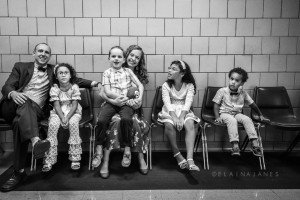 This was my family at about 1:00pm yesterday—or perhaps I should say this was about to be my family. Afterward it all seemed very anti-climatic. My wife and I swore-in before the judge (Both of us demonstrated our ignorance of the legal system by not exactly knowing why we were told to raise our right hands.), were examined by the attorneys, and then the judge declared that he had signed the papers for our three foster, now forever, children. Snap a picture with the judge, and then we were off to Baskin Robbins.

Within a few moments, three children who had been in the custody of the Commonwealth of Kentucky (two of them for 1,635 days) legally became my very own children, as the attorney repeatedly said: “no different than those of natural birth.”

In those moments, life won. The Satanic forces that crave baby blood, from the Nile River to Bethlehem to so-called Women’s Health Centers, cried out in agony as true religion that is pure and undefiled shone light into their beloved darkness–as the Father of the fatherless wielded his sword–as the gospel of sinners adopted as sons through sacrifice was reenacted.

Today, as the smoke clears and as the casualties are counted, I write to remind my brothers and sisters in the pro-life movement what we must never forget. This war doesn’t begin with and won’t end with the defunding of Planned Parenthood or even the overturning of Roe v. Wade.

No, this is a war that demands our lives more than it demands our Facebook posts. Yes, we want victory in Washington. But let us not forget: this Kingdom begins as a mustard seed. One day abortion will be no more, and this Kingdom will be a great mountain that will fill the whole earth.